Arguably the most popular Christmas movie of all time, ‘It’s A Wonderful Life’ began life as a short story penned by a hopeful writer and has now been adapted as a play for the theatre. Ian Smith chose this stage version of Frank Capra’s movie masterpiece when he made his directorial debut – an ambitious choice but one which was fully justified.

The production broke new ground in a number of ways: it was Common Ground’s first appearance at the Drill Hall, Lincoln’s new community arts venue; it was the first time we had staged a play at two different venues (we took it to Nettleham Village Hall for two evening performances and a matinee); with 22 actors it was the largest cast we had assembled; and it was our most ambitious production yet in terms of the size of the budget and the technical challenges of the set and the sound and lighting cues.

In the end we pulled it off, though not before what was left of the director’s hair turned grey. The show was well received, attracted over 400 spectators during a run of five performances – easily a record for Common Ground Theatre Company – made a small profit and significantly raised the profile of the company.

The Lincolnshire Echo praised the ‘strong performances’ which ‘brought to life the feel-good story’ while the Lincoln Chronicle rated the show as ‘a production which took time to thaw but warmed into a spirited re-telling of a Christmas classic’. 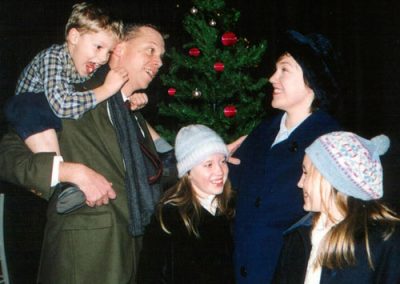